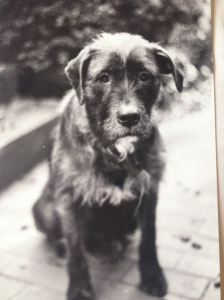 The Saturday morning market attracted the usual crowd eager for organic vegetables and people watching. My shopping bag was heavy with zucchini, golden beets, white corn, a potato or two, and a paper bag of Cremini mushrooms. The farmer’s market is the best place to buy fig vinegar and some of Sister Sarah’s homemade canned tomatoes. I couldn’t take home much else. Or so I thought.

Heavy as it was, I carried the bag and its contents toward the end of the row of food booths on First Street and took a left onto the grassy park next to the market. I turned around to be sure my daughter Kate was still behind me.

The Humane Society has been showing off its homeless animals at the farmer’s market for years. It’s been our family tradition to wander and look at all of them after we finished shopping.

My daughter paid the farmer for three organic tangerines, gently positioned the fruit in her bag and joined me. We walked together toward the rows of fences housing puppies and adult dogs awaiting adoption. A myriad of onlookers oggled at the puppies who batted playfully at one another. It was spring and newborns were plentiful. The smallest of the lot always attracted the most attention.

“Oooh! Look at the kittens!” Kate exclaimed. Like her mother, she had always been partial to cats. For all of her 18 years, Kate had enjoyed cats around the house.

We wandered over to the cat section and elbowed our way through the crowd to get a closer look. We saw the tiniest of kittens staring out between the silver bars of their cages. A Siamese was popular and looked like it was about to find a home. So was a tabby who had a big personality. But most of them would return to the Humane Society that night, still waiting for someone to find that special spark in their eyes.

“We already have three cats, my dear,” I replied. “We can’t take any more. Two of those are yours, if you recall. And you’re heading back to college in another week, so who’s going to take care of another new cat?”

“Well, they’re just so cute and they need a home.”

I was truly a softy when it came to homeless animals. And homeless friends, if truth be told. But this time I was certain we did not need a fourth cat.

“Let’s go look at the dogs instead,” I suggested and walked toward the dog pens. I shifted my shopping bag to my left hand as its weight was starting to leave a mark on my palm.

A cute little collie was attracting attention, as was a small Terrier. Those Terriers are always adorable, wiry and wild. Their name must surely derive from the word “terroir” which means terror in French. Any I have ever known were a bit on the crazy side.

Our dog Lucy was an American cocker spaniel, blond with a party nose. She was quite well behaved. She rarely paid any attention to other dogs and. literally, kept her nose to the ground. We didn’t need another dog, either. We had Lucy.

Off in the far corner of the dog area was a temporary circular fence with one gangly puppy inside. Someone had just taken out the puppy’s sister for a quick walk on a leash, trying her out to see if she fit the family’s lifestyle. Kate and I walked over to the fenced area and leaned down to pet the dark grey puppy with the bouncy ears.

“What breed are these?” I asked the attendant.

“They’re a mix of border collie and Airedale,” she said. “They’re really sweet dogs. Someone just adopted that one over there. Betsy here is the last of the litter.”

Of course, she would say they’re sweet. The volunteers didn’t want to bring any of these animals back to the shelter.

I scratched behind Betsy’s ears as Kate stroked her head. She looked a bit like a fawn with long spindly legs and a grey patch of fur fluffing out from the top of her head like a newborn chick. Betsy licked my arm and before I could do anything about it, she was suddenly in my arms. She had crawled up my body and was resting on my chest. I dropped the shopping bag and found myself hugging a puppy that was demanding to be my friend.

“Oh, Mom, she likes you!” Kate said with a knowing smile.

All I could think about was the new shirt and shorts I was wearing that day, wondering if this dog had fleas or was dirty.

“Sure, Kate, she wants a home,” I said as I held tightly to the puppy. “That’s why she likes me.”

I hugged the gangly gray Terrier mix who I later learned was a color called “brindle.” I thought about Lucy. And I thought about my husband Jack. It was Jack who really loved dogs. He brought me my first dog, a red English cocker spaniel named Thunder, before we were even married. “Kate needs a dog,” he had said then.

Behind my sunglasses, my eyes started to feel weepy. I began to analyze and justify what I was about to do.

Lucy was getting older. After all, she had been in our family for nearly 14 years and I knew she would not last much longer. Should this Betsy dog be a companion for Lucy? And a friend to Jack once Lucy died. I knew that Lucy didn’t really care much about other dogs. She was a loner and happy to be that way, a single loyal dog with her master. How would she take to having a puppy around?

In fact, I had purchased Lucy years before for much the same reason. I knew Thunder’s death would be tough on Jack and he would need another dog to help ease the loss. Would Betsy get along with Lucy?

Betsy clung to me like a scared rabbit. I had never had a dog crawl up on me the way this one had. She seemed almost desperate, the last remaining pup of the litter still not adopted. I looked into her eyes and she was pleading. She licked my face numerous times, not my favorite greeting from a dog; yet there was something about this puppy that stole my heart. She didn’t look like a Betsy, but a name could be changed.

“Should we take her home, Kate?”

“Yes!” Kate exclaimed and clapped her hands. “Jack will love her. She’s so cute!”

“Can you carry my shopping bag and I’ll take the dog over to the adoption table. I don’t have a leash with me, but maybe they have one we can use.”

And sure enough, they did. A temporary collar, a temporary leash, $75 adoption fee, signed paperwork and she was ours. This wiry-haired, brindle Terrier/border collie was now part of our family. What had I done?

Jack was surprised when I brought home a puppy, but he liked her. Betsy became Birdie on day one. Since Jack was a golfer, a name associated with the game seemed perfect. For the first few days, Birdie didn’t even make a whimper. She just cowered and shivered. Lucy’s initial greeting was nothing more than a sniff and then she ignored her, although that changed over time. Birdie was cautious with all of us, especially her new canine “mother”. Our puppy was tentative, sweet and ate as though she had not had food in a month.

On day three of her orientation to our home, Birdie had still not made a sound. To this day, we aren’t sure what stimulated her to finally speak. When she did, out came the voice of a much more mature dog, a deep and commanding bark that surprised us all. That infamous Birdie bark became our sentry for nearly 15 years. She was tough, smart and loyal to her family. In puppy training, Birdie was the smartest in the class. She followed directions perfectly, could balance treats on her nose, shake hands and bark to tell her age. She didn’t warm to other puppies, though, a trend that continued throughout her life.

When Lucy died, Birdie mourned her loss with a deep, soulful wail. Shortly thereafter, we adopted a little tan boxer/lab mix we named Allie. Birdie became her instant friend. The two were inseparable until August 1, 2014, when Birdie died at the age of nearly 15. In Birdie’s last moments of life, Allie licked her face lovingly as the two often did to one another.

I am still not really a dog person and yet Birdie was a very special member of our family. Funny how a little ball of fur can so easily win your heart.